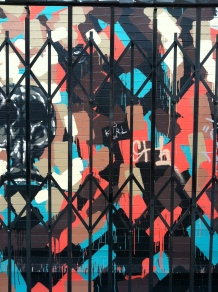 It’s been awhile but we’re back with another addition of the Underground Review. Here at HU we’ve been doing a lot of reflecting. As cannabis normalization marches into the New Year, we are taking a fresh look at what legalization means, how (sometimes if) it should be implemented, and what identity and role HU will take moving forward. When we first started the Humboldt Underground we held an ideological view born out of the chaotic medical cannabis grey market of California. Our ideological hope was for bolstering the status quo of medical marijuana through legalization (which is happening to an extent).

We thought, and still think, the current non-profit cooperative/collective model is revolutionary – it decentralizes cultivation and sale of cannabis while holding mainstream big business (and investment) at bay (albeit it makes the industry difficult to regulate). Nonetheless, this ideological hope inevitably met the material reality of western socio-political and socio-economic systems. With the passage of the Medical Marijuana Regulation and Safety Act (MMRSA), the current cooperative/collective model is set to expire one year from a date the yet to be created Board of Medical Marijuana Regulation (BMMR) makes an announcement to this end. For profit medical cannabis sales will began January 1, 2018 and all sellers and producers will have to obtain state issued licenses (more info here). This new act, combined with potential legalization in 2016, has sent Northern California into a stir. 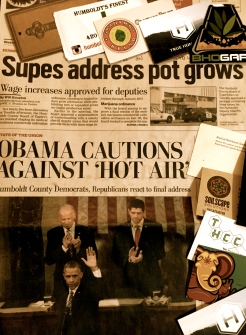 In local headlines just last week, the day after the State of the Union address, directly above a picture of Obama waving from the podium, you guessed it: weed, cultivation ordinance tension to be specific. In the shadow of MMRSA and in the headlights of legalization, city and county governments have been tasked with facing the proverbial elephant-in-the-room and bringing the cannabis industry into the light. Currently they have until March 1, 2016 to establish local guidelines (although this date is expected to be amended). This has sent local governments into frenzy, with many opting to ban all sale and cultivation in a hasty bid for time to contemplate legal weed. In Humboldt, CCVH has given the county a head start (thumbs up) and Humboldt (including the Emerald Triangle) seems to be further along than the rest of the state (as we should be). However, this doesn’t make the process any easier.

The Humboldt County Board of Supervisors and Planning Commission butted heads over the draft cultivation ordinance. The supervisors – siding with a conservative staff report – caught some flak for their disagreement with the Planning Commissions’ recommendations. After holding numerous community meetings and spending months delegating, the Commission cited frustration with the Board of Supes. The main beef is over the size of allotted grow sites and whether or not grows will negatively impact the environment. Its been mandated that grow sites must mitigate reasonable effect on the environment – the Mitigated Negative Declaration (MND) defined by state law. Fearing litigation from the environmental community and following recommendations from county staff, the supes sided with requiring public hearings to permit grow sites over 2,000 sq/ft. The commission had recommended that grow sites be scaled to parcel size – i.e. parcels larger than 320 acres could grow up to one acre of cannabis (the maximum allotted size provided by MMRSA). Basically the tension is over the difficulty of obtaining permits to grow larger plots of weed (from 2,000 sq/ft up to one acre).

Another point of tension is where cannabis can be grown. MMRSA classifies cannabis as an agricultural product and thus cannabis can be grown anywhere agricultural production is allowed. That is, unless local governments narrow the scope, banning cannabis from being grown in certain areas/zones. Home to California Redwood forests and tasked with preserving these trees natural wonder, Humboldt County leadership is in a difficult place between preserving the environment and bringing growers into compliance – as a majority of currently operating cannabis farms are located on Timber Production Zones (TPZ) or Forest Recreation Zones (FR). The draft ordinance states that growers operating 215 legal grows on TPZ land (as of last summer) may obtain a permit to continue their farming. However, no new grow sites will be allowed on these lands. The supes are attempting to move cannabis farmers to general ag land.

These are just two points that have sparked debate. There’s a lot of balls in the air, a lot to contemplate, and many stakeholder with many competing views. Watching this all unfold, HU has observed a hand full of different ideological “camps” taking shape. Here at HU we are trying create our own standpoint on legalization but it is proving difficult. With this conundrum bouncing around in our heads we decided to present a few different emerging and established views on this ordinance debate. Observing the arguments stakeholders employ, HU has attempted to extract basic ideological “camps” floating around in Humboldt County. There is overlap, as the following is theoretical and not set in stone, but we hope this exercise helps us think altruistically when forming opinions on the future of cannabis in Humboldt. This addition of the Underground Review will attempt to situate some examples of contending ideologies:

We have divided vast ideological viewpoints into six “ideal” types (Max Weber). They are: The Economic Optimist, The Mom and Pop Champion, The Do-Nothing Do-Gooder, The Environmental Altruist, The Counter Culture Pessimist, and The Conscious Observer. We are not asserting that all viewpoints fall into these categories. We are simply using these categories to make sense of a difficult to understand debate over the future of cannabis in Humboldt County.

Whatever category(s) you fall in, we all are watching how legalization will unfold in Humboldt County and the Emerald Triangle. Much is at stake, but what ever happens, it’s definitely interesting to watch how it will all shake out. Stay tuned… and let us know what you think…

This entry was posted in The Underground Review and tagged California, Cannabis, Cannabis Industry, Humboldt, Marijuana. Bookmark the permalink.

One response to “The Underground Review”